It might be a stretch to call this Moroccan Bread, but I wanted to try to make something that resembled what I saw on a Michael Pollan documentary that aired on Netflix.

As he tries his hand at baking, brewing and braising, acclaimed food writer Michael Pollan explores how cooking transforms food and shapes our world.

Visit food labs and Moroccan fields as Pollan delves into the science of bread-making and the nature of gluten.

I found several articles and recipes that approximated Moroccan bread. I focused on this one.

For the recipe, I used:

I followed the assembly instructions listed on the above web page, except my fermenting and proofing timings were a little longer to account for our cool house temp.

Next time, I need to add salt with the olive oil and sesame seeds, right before proofing. I like the sesame seed flavor, but it's not necessary. Actually, a lot of olive oil and salt on top of the dough is unnecessary too, in my opinion. It's not focaccia.

Even though this bread was 50 percent whole grain, I did not taste a lot of whole grain flavor. For some reason, this locally grown and locally milled rye flour is very mild tasting.

It might be interesting to see if I can adapt this recipe to use a poolish, like with the focaccia, although that extends the time it takes to make the bread.

Moroccan families make multiple loaves of this round, flatish bread every day. They use the bread like we might use a fork or a spoon to scoop up their food. I inferred that they eat bread often with most meals, which is my style of eating.

The focaccia bread that I made on Wednesday of last week was gone by Thursday evening. I'm guessing that this bread will be gone by tomorrow. I need to make bigger batches to have bread longer than 24 to 30 hours.

Even my 100 percent whole grain sourdough bread only lasts a few days.

This photo shows one of the dough disks after proofing and before I slashed it and placed the tray in the oven. 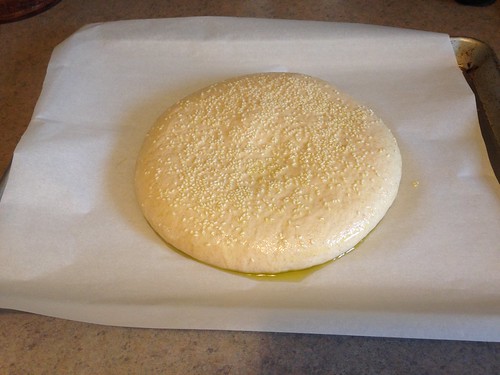 The instructions said to bake for 30 minutes or until brown. I probably could have let the bread bake a little longer than 25 minutes, but I liked the color. 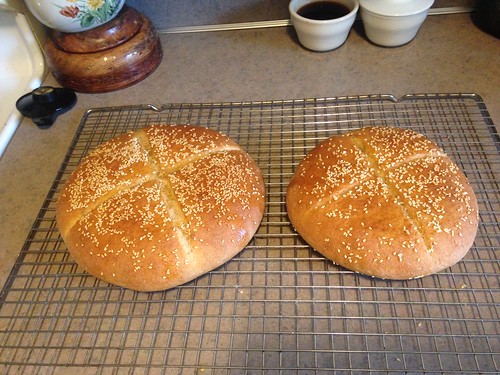 I tried to add a little olive oil on the bread after it came out of the oven, but that proved difficult because I knocked off the sesame seeds, therefore I halted adding more olive oil. I'll save the olive oil for focaccia. In the future, I'll use little to no olive oil for this bread.

It's flatish, which is how it appeared in the documentary. The real Moroccan versions, however, were not slashed. Maybe they pricked the dough with a fork. 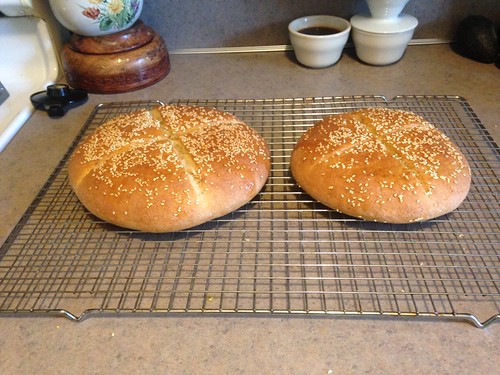 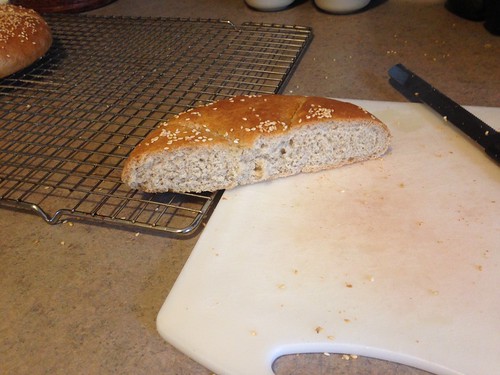 This quick bread was good enough to satisfy a bread craving to eat as a snack with olive oil or to dip into soup.