On Mon, Apr 20, 2020, I baked a 100-percent whole grain bread that used my sourdough starter. I followed the procedure that I used last week with the following exceptions.

I fed my starter during the day on Sun, Apr 19. Then I fed my starter again late on Sunday night, Apr 19 for usage the following the morning. I made back-to-back feedings of my starter prior to assembling the dough. I used room-temp, fresh starter.

For the ingredients, I used the following with baker's percentages given.

House temp for the day was 62 degrees. Outdoor weather was sunny with an afternoon temp around 60 degrees.

Assembly was like last week. I made four stretch and folds, 15 minutes apart.

The proofing started at 6:45 p.m. Once again, I used the oval-shaped banneton basket with the cloth liner.

This dough was a little wetter than last week's dough, but it came together nicely. I was surprised at how stretchy it was during the first stretch and fold. I probably could have stuck with allowing 10 minutes between the stretch and folds, since the whole wheat gluten strands formed nicely early on.

I fermented up nicely, more than I expected. It was a big, pillowy blob when I dumped the dough after fermenting. And as usual, shaping for proofing is always an anxious time. Some year, I will get this figured out.

I proof seam-side down in the lined basket. I preheated the oven and all of that like last week, except that when it came time to bake, I made one difference.

I still cut a piece of parchment paper and placed the paper on the counter. I dumped the dough and rolled it over to make it rest on the paper seam side down. And then I placed the parchment paper on the stone, and this was when I made three slashes across the dough. I did not slash the bread when it rested on the counter. I wanted to wait until the last moment to slash the dough.

I finished baking the bread at 10:15 p.m. I baked the bread like last week.

This bread has good shape and size. It smelled great too. 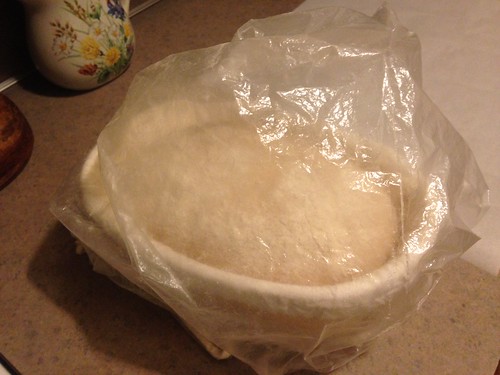 Done proofing and about ready to dump and bake. 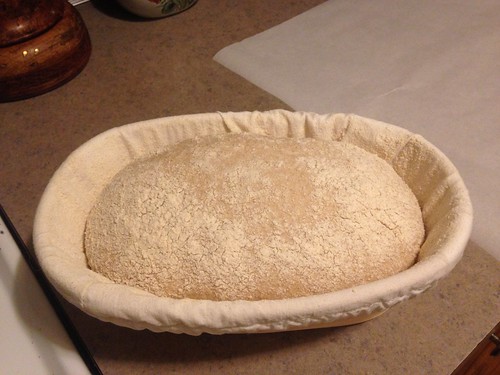 This bread dough proofed a little higher than last week's bread. It could be due to more water and no rye in this week's bread. 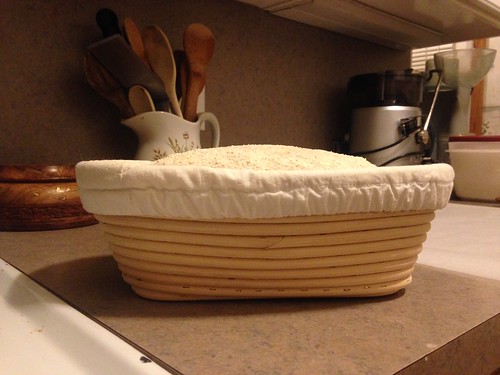 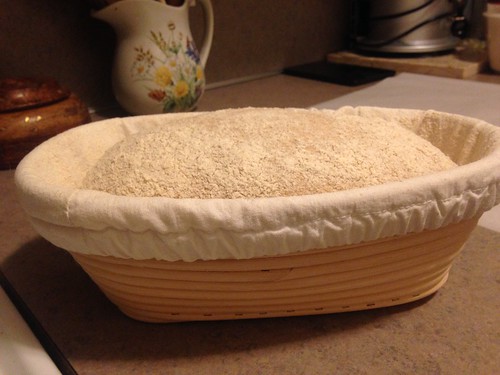 Read to dump the dough, place dough and paper onto stone, and then slash the dough. 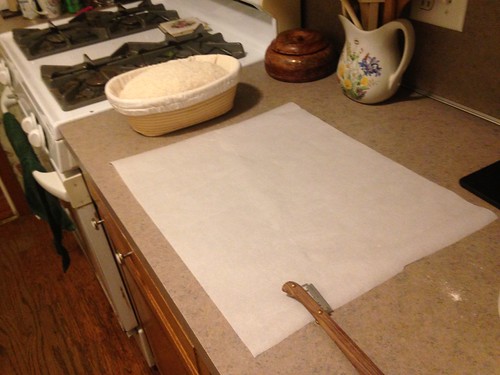 The next morning after baking the previous night. Better light for photos than at night in our kitchen. 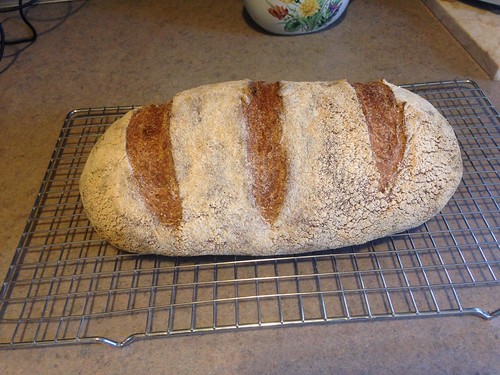 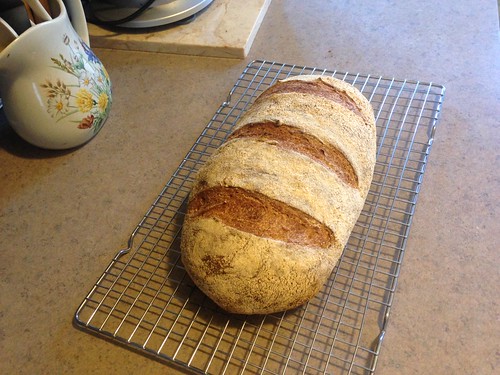 It had a good crumb structure. The crumb was moist. The mix of red and white whole wheat flours produced one of the best tasting breads that I have ever made. 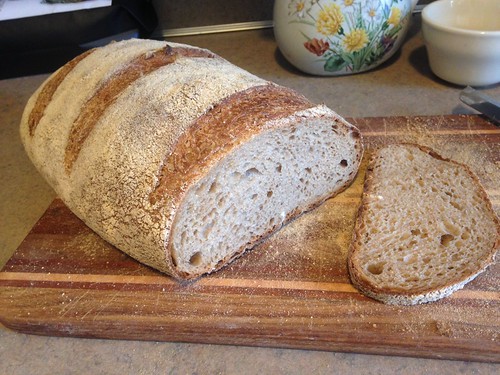 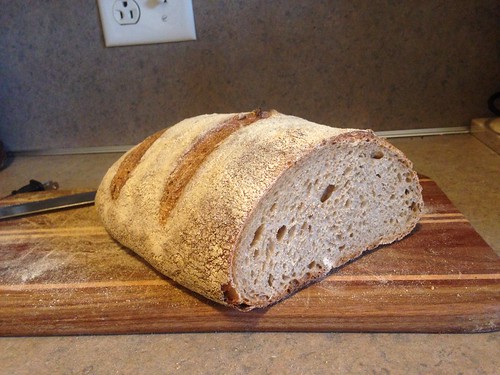 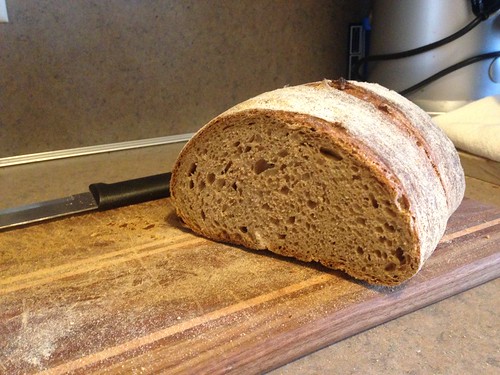 For lunch on Wed, Apr 22, 2020, I made my wife and I pizza bread. Deb dug out some items from the pantry and frig for me to use for toppings. I used the following items: 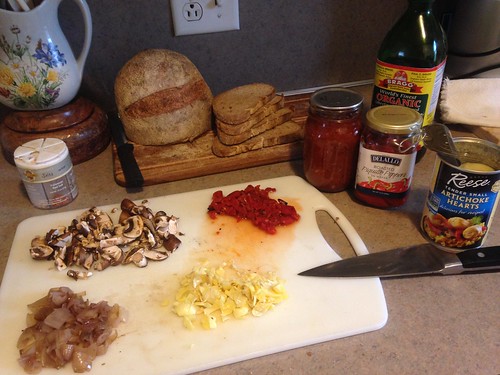 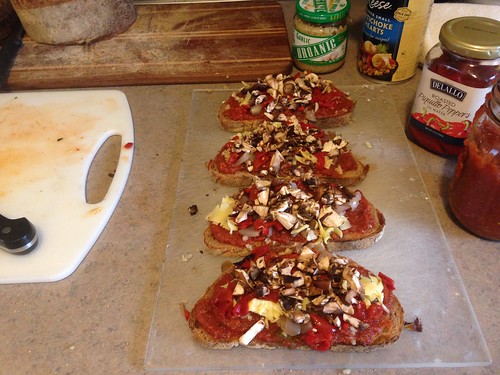 I used no cheese nor meat as toppings, since I follow a plant-based, whole foods diet.

I let the pizza bread cool for a few minutes on the cooling rack. 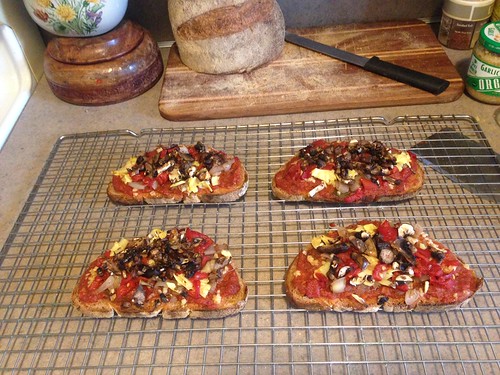 And then I plated the bread. 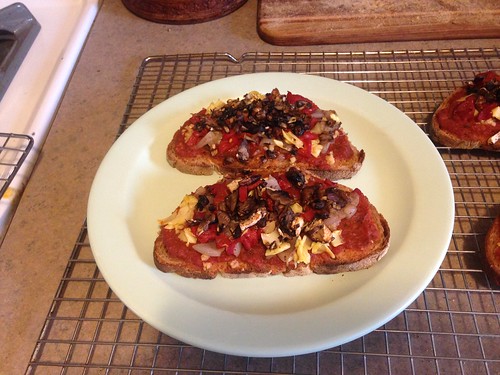 I wish that I had made a couple more pieces for Deb and me. This tasted fantastic.

As usual, I store the bread that we're eating cut-side down on the cutting board with the board resting on the kitchen counter. 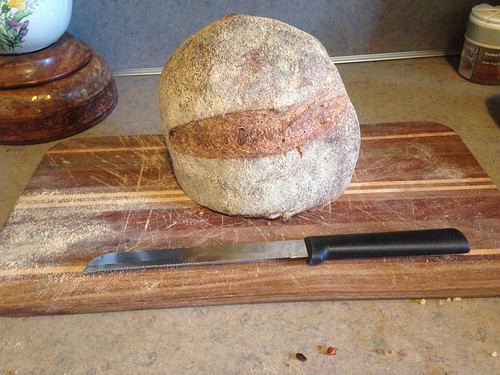 Zingerman's is still baking bread and shipping bread through the mail, but it's taking longer than normal to ship bread.

I have never tried this Zingerman's bread, which is a bread that they introduced in recent years.

“Miche” is French for loaf and typically refers to the large size and round shape in the style of traditional French country bread. In this case, our larger sized loaf is a whopping four pounds! Bigger loaves have bigger flavor, a moister crumb and longer staying power.

Ours is a "country" miche because it's made of a flavorful multi-grain mix of Michigan stone-ground wheat, freshly milled rye flour, whole buckwheat, and spelt flour, all naturally leavened by its own unique starter. Then it's baked to a dark caramelized crust giving it natural sweetness and extra flavor. The whole process takes about 18 hours. The result is a deep and complex flavor.

The co-op sells King Arthur stone ground organic white whole wheat flour because in 2019, Deb asked whether the co-op could order and sell the flour, and they did and still do. Others are buying that flour too because it's usually out of stock, and I saw them stock new bags a few weeks ago.

I last made focaccia several years ago. I should make this more often and keep it simple: the dough, olive oil, and sea salt.

I have not made khobz or khubz. This would use instant yeast. It would only take a couple hours or so from start to finish to make this ripping and dipping bread.

The final dish comes in the form of Khobz Tabouna. This is another form of bread and again, it’s something that isn’t likely to be made in the typical Western household.

This is mainly because it takes around five hours to mix and knead the bread and again, takes advantage of cooking equipment that just won’t be found in most households outside of Tunisia.

The tabouna which the bread is cooked in is several feet tall by several feet wide and narrows towards the top. Additionally, it is formed from baked earth – making it even more difficult to build – and forms an oven whereby bread is cooked vertically. There are stones at the bottom of the tabouna to retain the heat and ultimately bake the bread.

It might be a drawn-out process, but the end result is that Khobz Tabouna is not only a famous dish, but a particularly delicious one.

I have collected a handful of recipes. This is another one.

Traditional Moroccan white wheat bread. You can see it on the 1st picture of this article. Khobz has a disc shape, it’s height is between 1,5 and 3 cm. Moroccans like to bake khobz by themselves – the recipe is easy.

Khobz should be baked everyday – there’s no possibility to bake some bread in advance –on the 2d day it becomes too stale. Moroccans use khobz as a garnish to main courses and serve it to almost any meal. It is very convenient to collect the remains of sauce with bread.

My other bread notes: