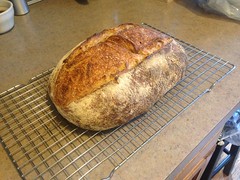 Today, I finally baked bread, using my sourdough starter. Deb has been asking for bread. And today, I finally used the rye flour that was locally produced. Our CSA farm, Shared Legacy Farms, grew the rye for Toledo Spirits distillery, which they used in their new Heart of Gold vodka.

My other bread notes:

My notes from today's process:

I last fed my starter on April 9. I would have preferred to use a fresh starter by feeding it the night before, but I didn't. A frig-temp, five-day-old starter works too.

The water temp in the filtered pitcher was approximately room temp. I store the water pitcher in the frig in the summer. During the cooler time of the year, I prefer that the water pitcher sit out on the counter. It's easier to drink.

The house temp was a "warm" 64 or 65 degrees because Deb cranked up the heat the day before, and I let it go overnight. I had to sleep with a window up several inches in our bedroom. I prefer the house temp to be around 60 to 62 degrees.

The outdoor temps today remained in the 40s all day. It got windy in the afternoon. It was a raw, chilly mid-April day, but nothing too unusual.

Dimensions of the bread immediately out of the oven:

The bread was longer and wider than most breads that I bake, but it was also shorter too. The slack dough or low gluten dough spread out after dumping it from the proofing basket.

What I should do next time is:

The goal would be to get the baking process started immediately after dumping and slashing the dough. If I proof seam side up, then I could place the parchment paper on the stone, dump the dough onto the paper-covered stone, and then slash it.

With the above bake, I allowed the dough to spread out on the counter for a couple minutes before placing it into the oven.

Apr 14, 2020 images. Sometimes, I get focused on what I'm doing and forget to photograph a process.

This my sourdough starter dissolving in the room temp water. 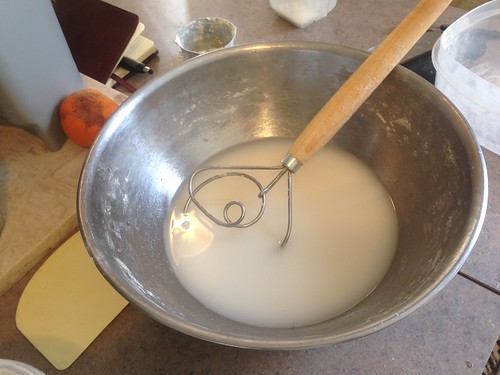 These are the three flours, piled into another bowl before I mixed the flours together. 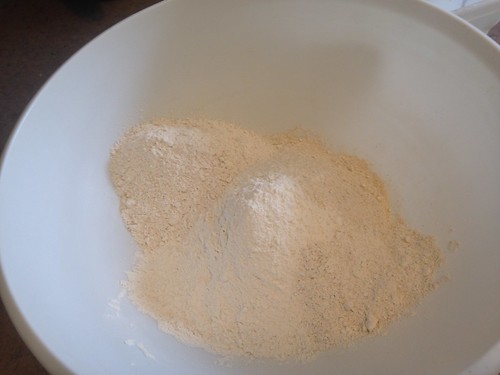 After mixing everything together for a couple minutes, I dumped the shaggy dough ball onto the counter. This is how the dough looked before the autolyse where I covered the dough with the mixing bowl and let the dough rest on the counter for 30 minutes. 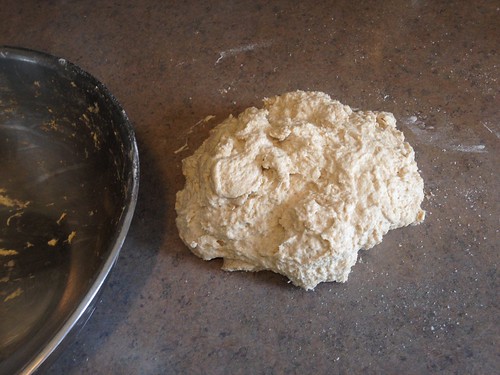 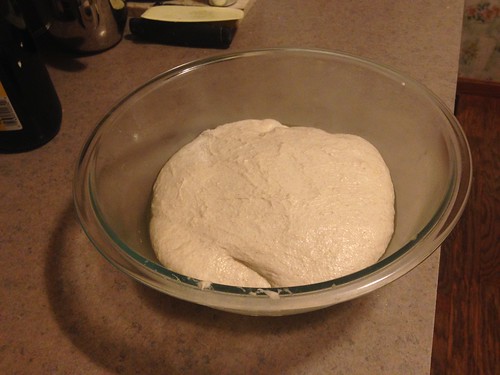 This photo is also of the dough after fermenting and before dumping it on the counter. It's hard to tell how much that the dough expanded up the sides of the bowl. I should have photographed the dough in the bowl after the fourth stretch-and-fold. 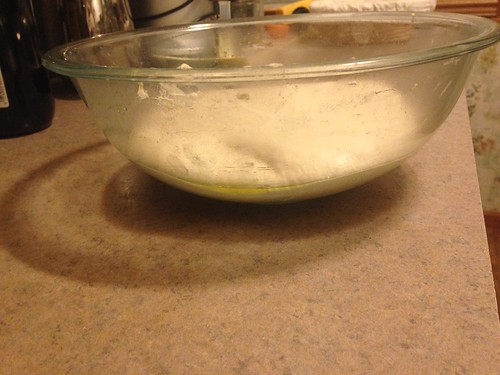 After fermenting and dumping the dough, I tried to organize the dough a little. This is the dough before beginning the 20-minute bench rest period. After this photo, I covered the dough with the same bowl that I used for fermenting. 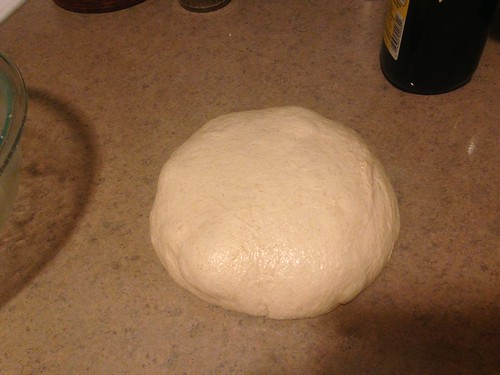 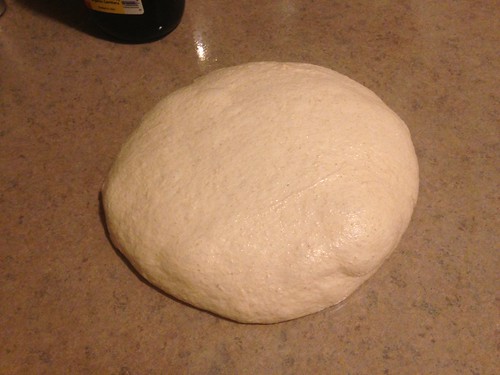 I added white whole wheat flour to the liner that I placed inside the banneton proofing basket. 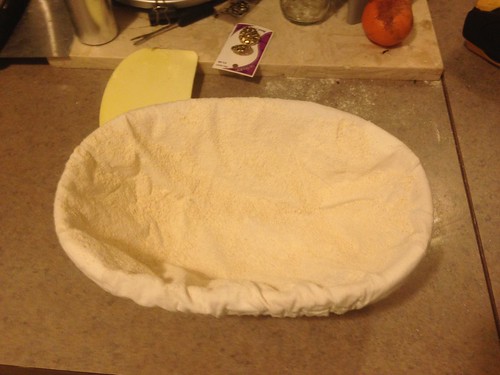 And this is how the proofed dough looked after three hours of proofing. The photo showed the lame that I use to slash the dough. Deb bought me this lame several years ago. Any sharp knife will work though, but for wetter dough, however, a razor blade will slice the dough easier. 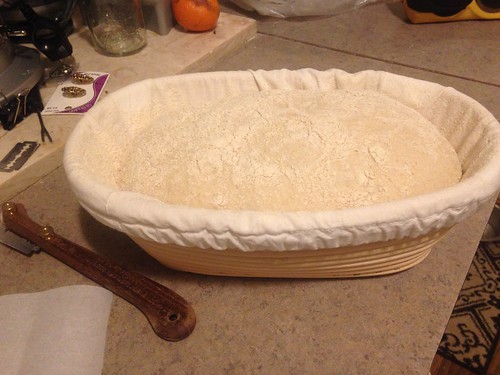 I forgot to take photos of the dough resting on the parchment paper on the counter. I should have photographed the dough before and after slashing.

The most important photos: 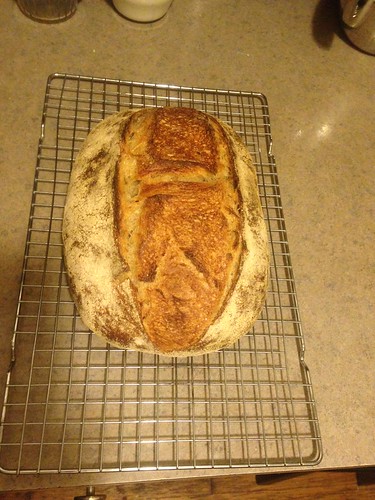 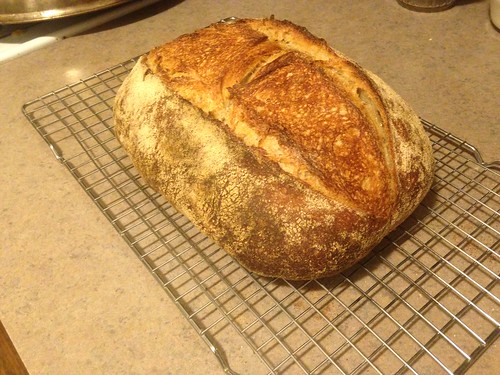 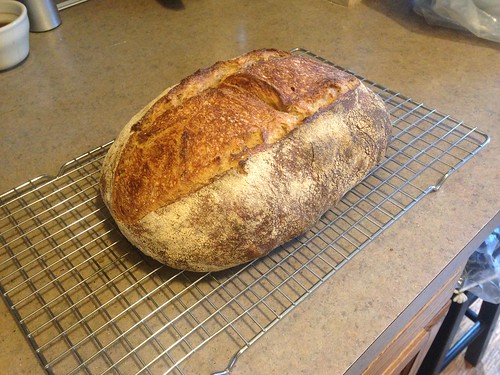 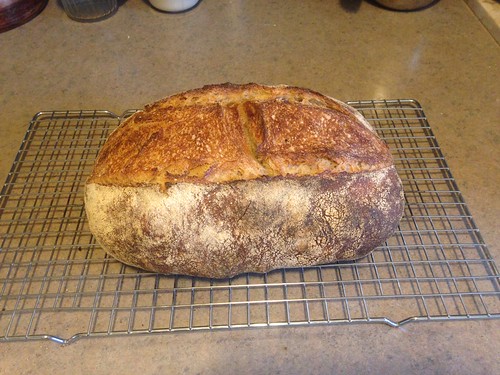 In the morning, Deb and I ate some bread plain and untoasted, which is my favorite way to eat great bread. On bread baking day yesterday, I roasted coffee beans in the afternoon. This morning, I made Deb and me pour-overs with those beans. We ate bread and drank coffee. Simple but both tasted fabulous. It's not a cliche to say that good things take time. 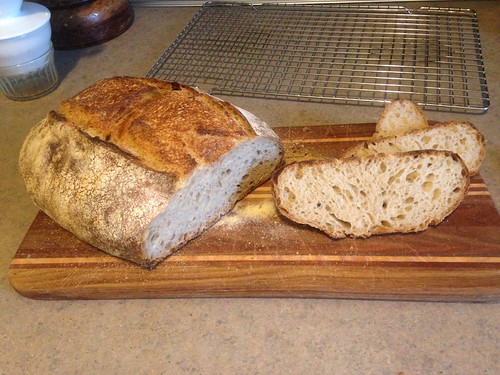 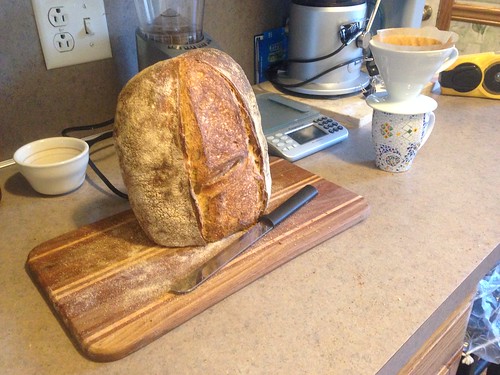 I store my bread cut-side down on the cutting board with the board resting on the kitchen counter or on the dining room table. I do not place the bread inside plastic. Bread can be frozen, but it should not be placed in a plastic bag, nor should bread be stored in the refrigerator. I leave my bread on the cutting board uncovered. At most, I would drape a paper sack over the bread.

I was pleased with the overall shape of this bread. Sometimes, my breads are misshaped due to my poor shaping after fermenting. This bread ended up fairly uniform in shape. Again, I assume that the spreading out of the dough after fermenting was because it was a slack or higher hydration dough, and, supposedly, rye flour is lower in gluten than whole wheat flour.

In a future bread, I might try using 50 percent rye and 50 percent all-purpose flour and no white whole wheat, except for my starter. I guess that I expected the bold rye flavor to dominate, but maybe this particular rye plant or growing was milder. I love the taste of this bread though.

Another whole grain that I like to use in bread baking is spelt flour that I buy from the Phoenix Earth Food Co-op. In the past, I have baked 100 percent whole grain breads by using 70 percent WWW and 30 percent spelt. Spelt flour has a mild, sweet, nutty flavor.

White whole wheat, spelt, and rye are favs. But I have thought about trying to use the red whole wheat flour again. Maybe on my next visit to the Phoenix Earth Food Co-op, I'll buy red whole wheat and spelt flours from their bulk bins.

Not many positives have occurred, during our sheltering and shutdown period, due to the Covid-19 pandemic. But one positive is that people are cooking more at home, including baking. My wife has mentioned that she has observed more people discussing bread baking on Facebook.

And apparently, baking flour is one of those hard-to-find items in grocery stores. I don't shop at big-named stores for food. I shop mainly at the co-op, and sometimes at Claudia's Health store, located near us. At the co-op, however, I've been able to buy paper towels, toilet paper, and flour.

Regarding the baking flour shortage in some areas, the idea espoused in this Apr 10, 2020 post is interesting.

Consumer flour, sold in grocery stores, is in short supply. But commercial flour is readily available because many businesses that use commercial flour have shutdown or have scaled back considerably. Commercial flour mainly means flour sold in much larger bags.

The idea is to buy a bunch of these large bags of flour. It's not possible to buy only one large bag. Many bags have to be bought at one time. The purchase, however, is made by numerous people pooling their money together, and then the bags get distributed to all who agreed to the project.

We just had a huge shift from people eating out to eating in, and now a lot more people are baking, so we and a lot of people I know have had trouble finding grocery stores with flour in stock.

Obviously, baking with flour does not mean only bread baking. I would like to make pasta from scratch by using all-purpose flour, semolina, and water. It would be an eggless pasta, since I like firm pasta, and I follow a plant-based, whole foods diet.

The residential supply chain is struggling to keep up with demand. On the other hand, the commercial supply chain is massively under-utilized: so many restaurants that had been buying 50lb bags of flour regularly are now buying none. What if those of us with households that go through a lot of flour bought some from commercial sources? Not only would we have flour, but there would be less pressure on residential supplies and so more for others as well!

One of my coworkers pointed out that Baldor, a local specialty foods distributor, was now making home deliveries as long as you'd order at least $250 worth. Their flour was a bit fancier (King Arthur Sir Galahad, which is commercial King Arthur All-Purpose) and so more expensive, but their shipping was cheaper so it was still only $0.56/lb. I placed an order for 27 bags on Wednesday and wrote to people letting them know about the change and asking if they wanted to cancel their order; none of them did.

I told people they'd arrived, people paid me via paypal/zelle/check, and people started coming to pick them up.

They look like 50-pound bags of flour, wrapped in mostly plain brown paper. It's a good idea. One 50-pound bag of AP flour would let me produce a lot of bread, pizza, and pasta.

Anyway, it's interesting the ideas that people create in odd times to help others.

Two or three weeks ago, Deb purchased hand sanitizer from Toledo Spirits, but neither one of us went to pick it up, until today. I went to their online store, and I bought a bottle of their Hear of Gold vodka. If I drank vodka, it was so long ago, that I don't remember. It has never been a beverage that I wanted to drink.

Last summer when a group of us visited Toledo Spirits for a tour of the distillery and for a tasting of their spirits, I liked the taste of the Heart of Gold vodka. I've been a fan of their Maumee Moonshine and East Side Gin, but this particular vodka surprised me.

Since their Heart of Gold vodka, at least last year, was made with rye flour grown by Shared Legacy Farms, I decided to buy this vodka to drink with the bread that I made above.

Late this afternoon, I parked in the Toledo Spirits lot. They closed at 5:00 p.m. I arrived at 4:30 p.m. The protocol is to call or text their phone number after arriving. I texted with the order numbers for the hand sanitizer and the vodka. I remained in the car. They placed my items in paper sacks and set the items on a table, located outside their door. I went up and retrieved the items and left.

I drank the vodka in a small glass, made by the artists at Gathered Glassblowing Studio, located in downtown Toledo. It's one of our favorite places to visit, during the Third Thursday Art Loop events, held in downtown Toledo, during the summer and fall. The glass shown in this photo is from their "Watercolor" collection. 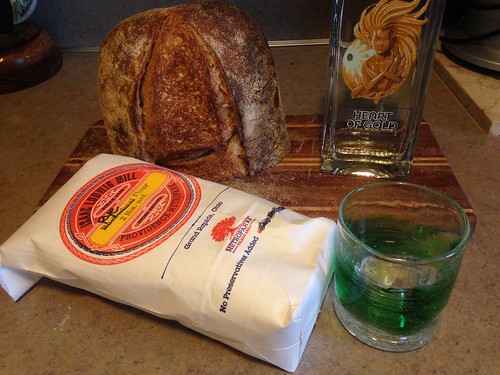 We bought four four-ounce bottles of the hand santizer, produced by Toledo Spirits. 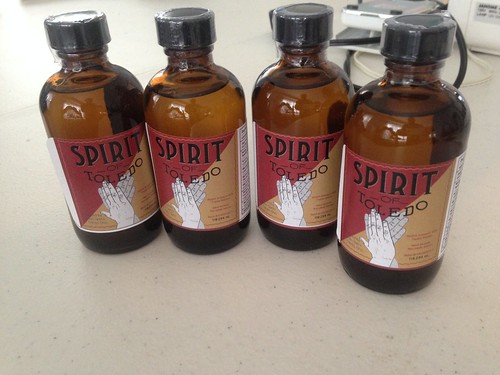