I followed my notes for the 100-percent all-purpose flour version, described on this page.

I used King Arthur all-purpose flour. I like to use some spelt in my pizza dough. I need to buy spelt flour from the food co-op. The spelt gives the dough additional flavor, but it also makes the dough less stretchy or stiffer and a little thicker, which is fine. The spelt-enhanced dough makes for a tasty crust.

But today, Fri, Apr 3, 2020, I wanted to go the easy route and use all-purpose flour, which makes for a very stretchy, easy-to-use dough.

I followed the "Making the Dough" and "Baking" instructions, listed on the above pizza page.

Our house temp was in the low 60s. The dough fermented for at least 3.5 hours, and it proofed for around 2 hours before I stretched the first dough into a pizza.

We ate two pizzas this evening. I waited a while before I made the second pizza, which meant that the dough proofed longer. I placed the other two dough balls into separate plastic bags, and placed those bags into a plastic container that I stored in the refrigerator.

For the sauce, I used my wife's homemade sauce that she canned last fall, using tomatoes that we ordered from "our" farmer, Shared Legacy Farms, which is a CSA, community supported agriculture.

Since I adopted a plant-based, whole foods diet in November 2018, then I don't use cheese on pizza. Deb had jars of kalamata olives and artichoke hearts, and I added both to the pizzas. We were out of mushrooms. I added olive oil and coarse, pink Hawaiian sea salt before baking.

We did not have any fresh basil on hand to add after the pizza came out of the oven. The pizza still tasted great. I baked at 500 degrees. It's hard to get some char on the crust when baking at home.

I baked with the pizza stone on the bottom rack.

I forgot to take photos of the dough before and after fermenting. 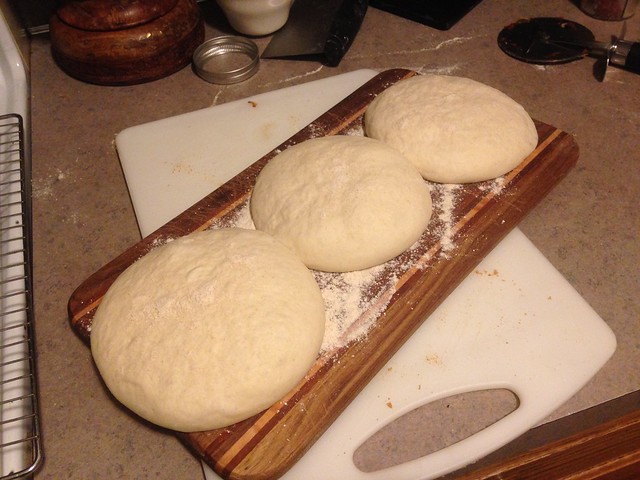 This next photo shows the stretched pizza dough, placed on wooden peel, ready to be topped. As usual, I stretched the dough by hand and not with a rolling pin. I pat down the dough ball to make a flattish disk. Then I stretch the dough by placing the dough on the back of my knuckles and also by holding the edges and letting gravity help.

I don't have the talent nor the room in our kitchen to toss and spin the dough in the air, which is done for show, but the air-spinning is also done to stretch the dough much faster into a wide, thin circle by relying on centrifugal force. A professional pizza baker who would make dozens of pizzas in an evening cannot take as much time as I do to stretch the dough. It would be pertinent to learn how to spin the dough in the air.

The mobile device is an Amazon Fire that my Mom gave me because she no longer wanted it. She has used the iPad Mini for years. This small tablet is nice to use in a messy kitchen with flour and olive oil being splattered about. 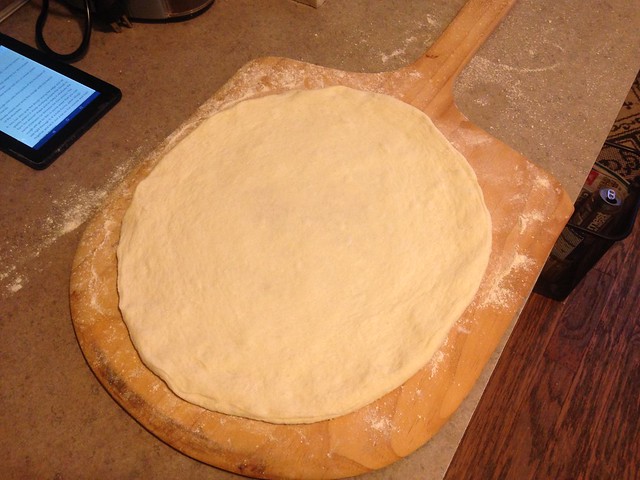 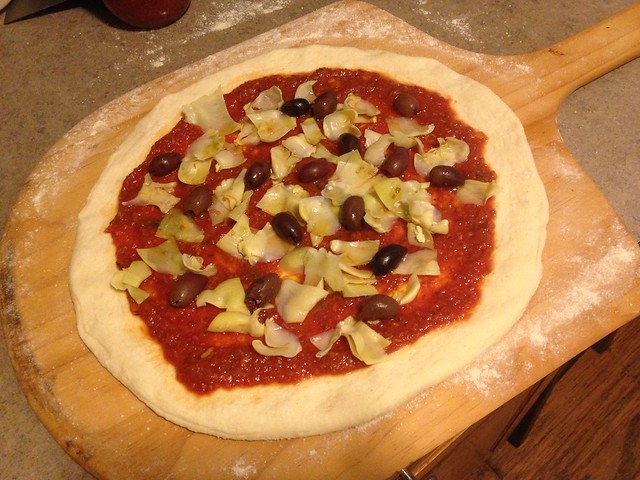 Pizza placed into the oven on a half-inch thick pizza stone. Supposedly, the 3/4-inch stone is better, but we have used this stone for several years to bake many things, including my breads. 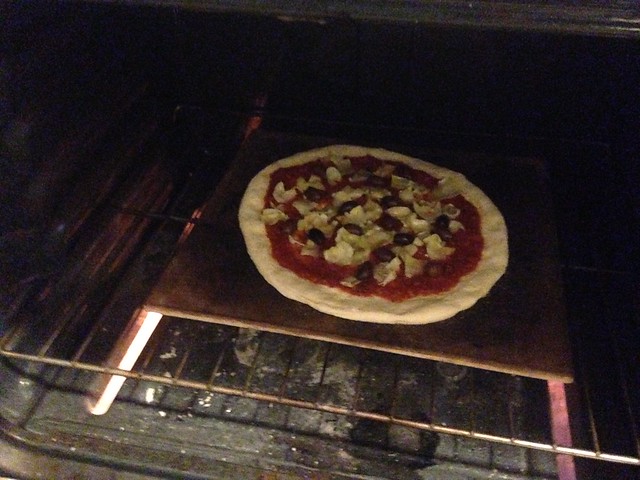 After baking, I let the pizza rest for a couple minutes on a cooling rack before slicing. 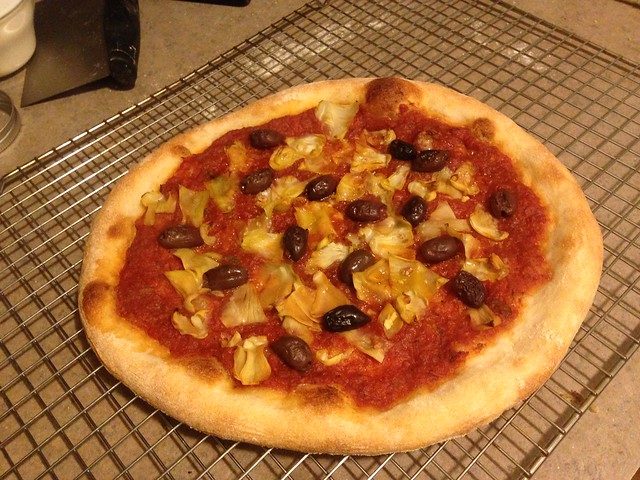 Obviously, it's a thin crust pizza, easily folddable from the tip toward the crust. 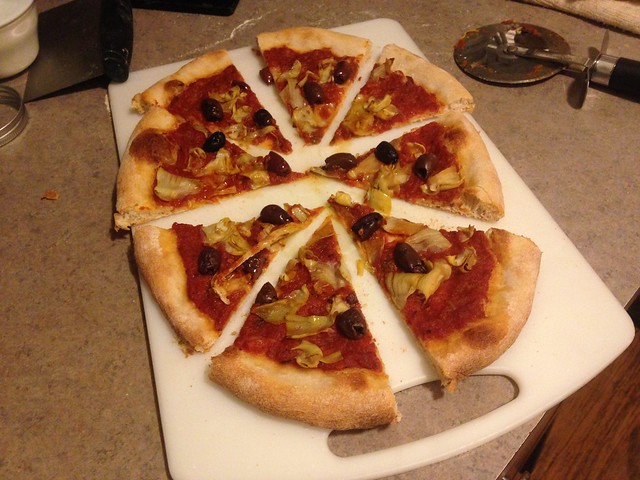 Deb enjoyed the pizza too. Yeah, it takes a little time, but now we have two more in the frig to eat within a few days.

For lunch, we ate two more pizzas, using the two remaining pizza dough balls from Friday. The pizzas are about medium-sized, and since they are thin and lack meat and cheese, then the pizzas not very filling, which is nice.

I finished off the olives and the artichoke hearts with today's two pizzas. I also added sesame seeds to the crust edge. And I added dried tomato skins.

Last fall when Deb canned her pizza/pasta sauce, she saved the unused tomato parts, as usual, and she dried them in a dehydrator, and then placed the small, thin dried tomato pieces into jars that she stored in the refrigerator. Or if they were not unused tomato parts, maybe she simply wanted to have dehydrated tomato pieces because they pack so much flavor. She has done this in past years when we had too many tomatoes growing in our backyard.

How can a backyard have too many tomatoes?

I used a mortar and pestle to grind the dried, crunchy tomato pieces. I ate some of the pieces too, and they tasted like delicious candy to me. Impressive.

I added the ground-up dried tomato pieces to the pizza.

Man, these dehydrated tomato slices taste great. When I have a sweet-tooth craving, I need to eat a few of these. 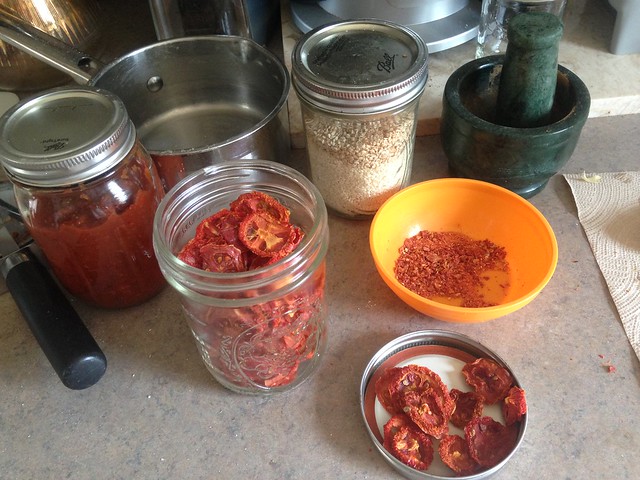 Since the dough was stored in a square-ish container, the chilled dough started off with a rectangle shape before shaping, and it seemed to continue that way as I shaped it. These two pizzas still tasted great. 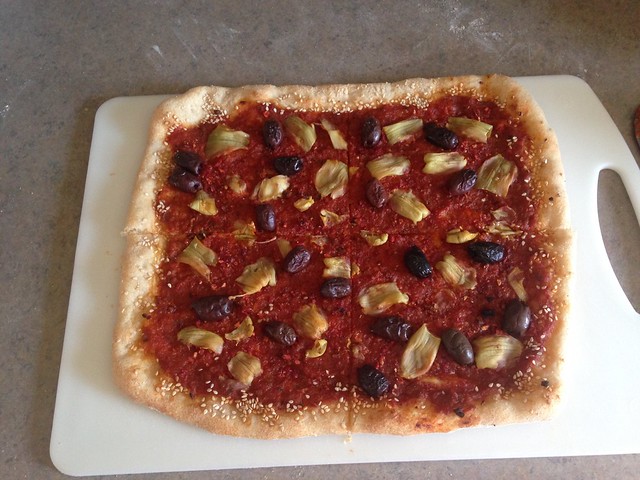