When I discuss local media and my digital subscription to our "daily newspaper", called the Toledo Blade, I repeat myself by describing how I read the Blade. I'll use this page as the reference that I can link to, instead of saying similar things over and over.

Even though I'm a Blade digital subscriber, I do not use any of the Blade's digital offerings because those products are terrible.

I created my own web app to read the Blade. It uses the RSS feeds that the Blade still provides.

https://www.toledoblade.com/rsslinks (some or many of these feed links do not work)

I use the following feeds:

That Blade page of RSS links lists around 77 feeds, which seems far too much granularity. But most of those feed links produce nothing. I wonder if the Blade management realizes that their CMS still produces some feeds.

I like the option of having RSS/Atom/JSONFeed/h-feed feed options available for information consumption, but I have never been a big feed reader user. I'll use a feed reader for a while, and then I'll stop for a long time, and then I'll access feeds again for a short while, and then I won't. Yo-yoing. On again and off again. I still prefer to visit websites directly or to subscribe to email newsletters.

In 2019 and 2020, most of my feed consumption on daily or near daily basis is based around how I read the Toledo Blade.

My Blade web reading app runs on a server that I lease. The Blade articles that my app displays focuses on the content, which means no JavaScript, no ads, no trackers, and no gobbledygook.

The articles created by my Blade web reading app load fast because they are lightweight.

My Blade web reading app could be violating the Blade's terms of service, but as I've said many times here in the past, the Blade's web design violates the rules of human decency. If I could not read the Blade MY WAY, then I would not fund the Blade.

When local media orgs disrespect subscribers by offering readers disgusting, ad-filled, tracker-filled websites, then those media orgs should not be surprised when people don't want to fund their craft.

It appears that the Blade is trying to get people not to read the Blade on the web. And in my opinion, the Blade's mobile app products are not suitable alternatives. All of the Blade's bad digital offerings make their print product a better option, which is stunning. It takes effort to fail like this.

I can read the Blade via my own Blade web reading app by using any web browser on any internet-connected device. I can use graphical and text-based web browsers on my old Linux desktop computer. I use Chrome on a Chromebook and Safari on an old iPhone.

(May 2020 update: In late November 2019, I replaced my old Linux desktop computer with a Lenovo laptop, running Ubuntu that I purchased from Virtual PC, located in West Toledo. I rarely use my Chromebook, but I still use my old iPhone that I got in June 2014, and it runs iOS v8.x. On my new Linux laptop, the browsers that I use the most include Pale Moon, which is a Firefox derivative, and Links2.)

I can even read the Blade via my web app on an old Blackberry phone because my app produces simple HTML pages with a tiny amount of CSS. My version of the Blade articles are like the articles found at https://text.npr.org, except mine are enhanced with a smidgen of CSS, borrowed from https://bestmotherfucking.website. EZ-PZ.

More importantly, my design for web news articles is a superior way to treat subscribers. Respectful. Empathetic. How is this stunning simplicity lost on newspapers?

The Blade's hideous web design is not the fault of local residents, Craigslist, Facebook, nor Google. It's a bad choice made by Blade management.

Finding a sustainable funding model that supports local news is the holy grail. Obviously more is needed than good web design, but bad web design can only bring harm to a digital media org. Most users won't complain. They will simply move on.

And bad web design that disrespects readers can deter people, such as paying customers. Digital media orgs should appear to be welcoming by deploying useful and respectful web designs.

This is a screenshot of the Blade's so-called homepage. I wanted to use the Blade's search function, which required me to disable Privacy Badger and to enable JavaScript to make the search work. ?!?!?!?

toledoblade.com is a dumpster fire website. At least 50 percent of the screen is polluted with ads. In this screen shot, only five stories appear with titles. It's understandable why people stick with Facebook for information. 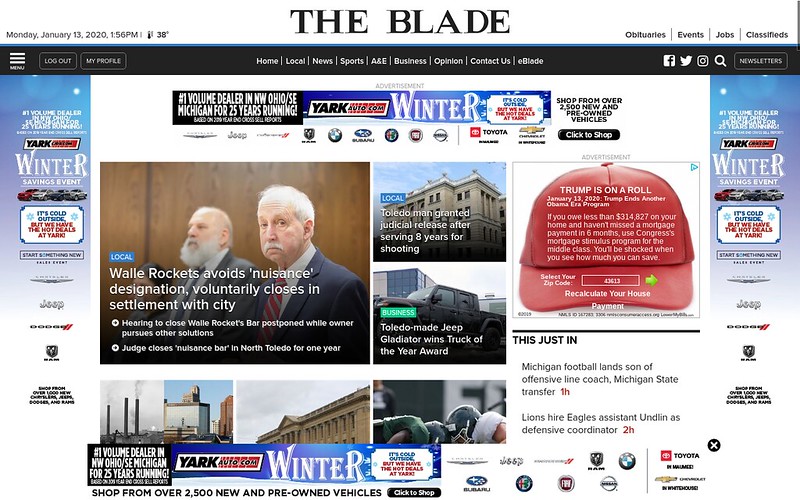 The Blade's web design from 20 years ago would have been better than this, and the site in 2000 would have loaded faster.

From archive.org, here's a Mar 1, 2000 screen shot of the local news section at http://toledoblade.com/index/news.html. The narrow web page looks similar to the how the Blade's content appears in a feed reader, which is/was great. Many stories were listed on that local news page. The title and a snippet of text existed for each story. Very feed-looking, which has been similar to how the giant social media silos have acted over the past 15-plus years.

It's hilarious that our daily newspaper website borrowed a design aspect that was popularized by blogs and feed readers. Then the newspaper websites chose a different, more hideous web design while Facebook, Twitter, and Instagram gained massive traction in the late aughts and early tens by adopting a feed format.

Even the blog and feed-reading format was nothing new. Print newspapers or parts of print newspaper front pages listed some stories in a similar format long ago.

As a paying customer who desires quick and easy access to the Blade's stories, their 2000 web design is preferred over today's garbage design. I would pay more than my $12.99 per month subscription for this look. 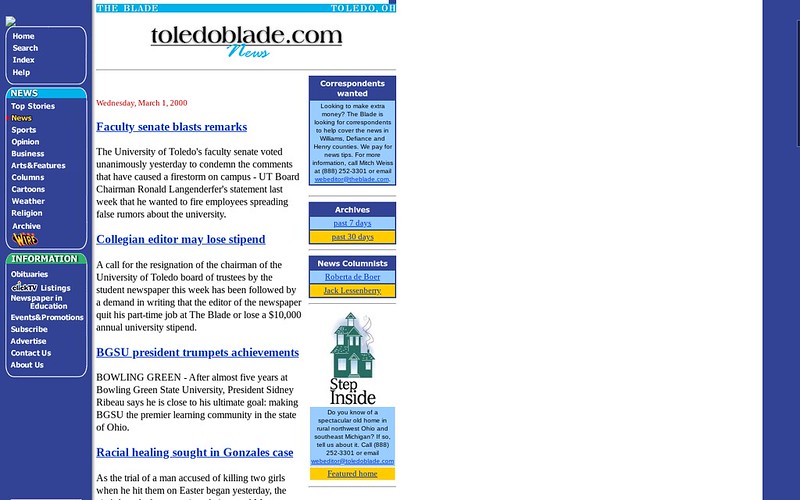 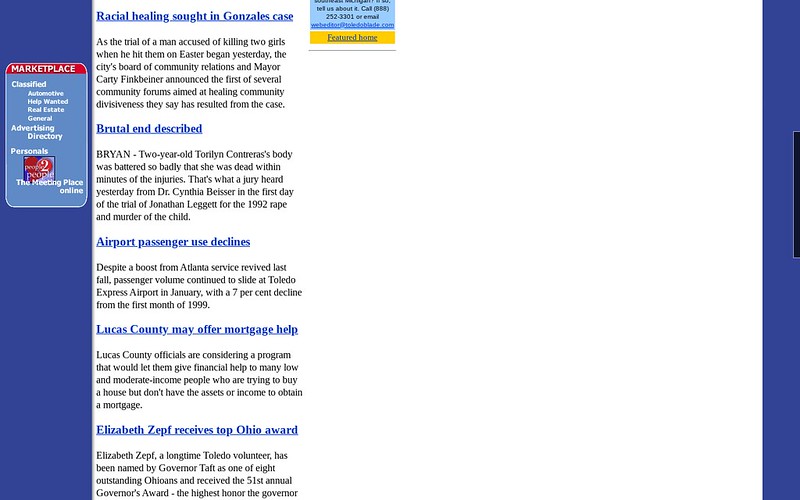 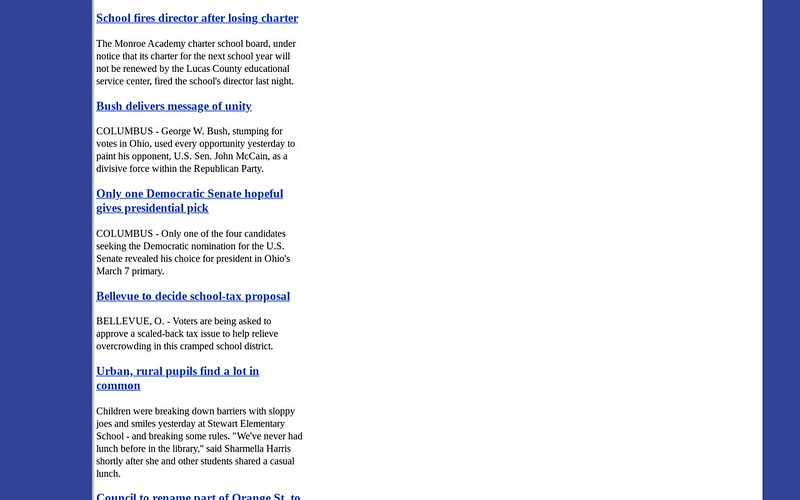 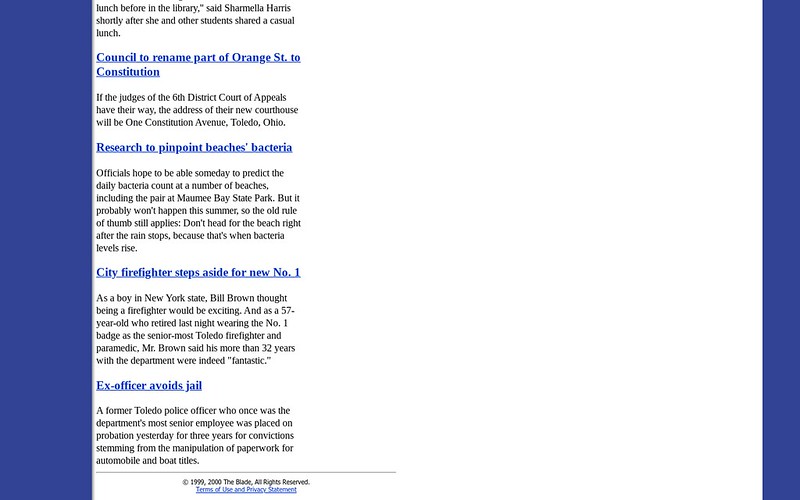 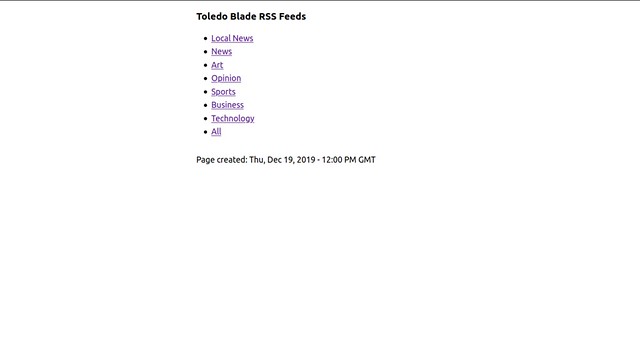 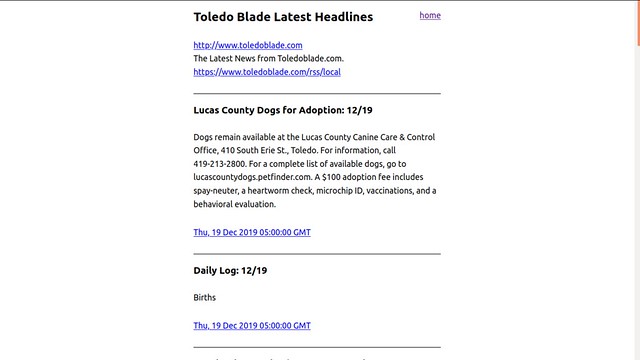 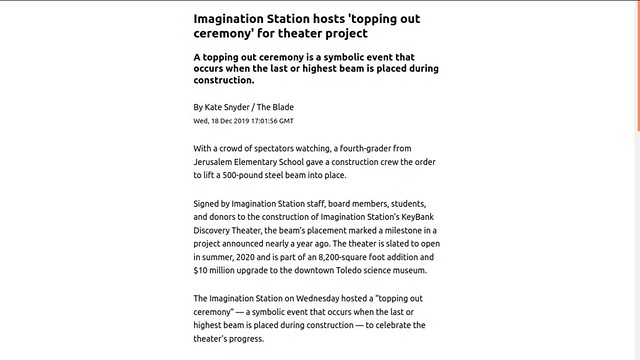 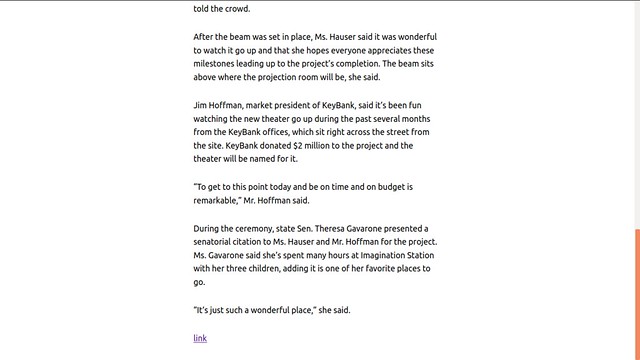 That pointed to a NY Times story. Excerpts:

Anger toward big technology companies has led to multiple antitrust investigations, calls for a new federal data privacy law and criticism of the companies’ political ad policies. Perhaps no issue about the tech companies, though, has united lawmakers in the Capitol like the decimation of local news.

Hold on. Craigslist did not get blamed in the article. ?!?!? That's newsworthy.

But prior to 1990, local newspapers had a monopoly or a near monopoly on local advertising. Did the newspaper industry complain about its ad dominance in the golden days?

One more excerpt from the NY Times story:

Many officials also say that without robust local coverage, they are constantly fighting against misinformation that spreads on social media.

These are the headlines for the stories that appear in the latest Toledo Blade RSS feed for local news. The dates for these stories in the current local news feed vary from today, Jan 13, 2020 back to Jan 10. I assume that the dates are creation dates, and the mish-mosh ordering is due to updating. Regardless, how much of this is "useful" news? What's the definition of "useful?" Which part of this is ending misinformation and saving democracy?