Tonight: A slight chance of snow showers before 4am. Mostly cloudy, with a low around 9. Northwest wind 3 to 7 mph. Chance of precipitation is 20%.

Saturday Night: A slight chance of snow before 1am. Mostly cloudy, with a low around 29. Southwest wind 10 to 14 mph. Chance of precipitation is 20%.

Sunday: Mostly cloudy, with a high near 39.

Sunday Night: Mostly cloudy, with a low around 26.

Washington's Birthday: A chance of rain after 1pm. Cloudy, with a high near 40. Chance of precipitation is 30%.

Monday Night: Rain and snow likely, becoming all rain after 2am. Cloudy, with a low around 35. Chance of precipitation is 70%.

Tuesday: Rain likely, mainly before 1pm. Cloudy, with a high near 45. Chance of precipitation is 60%.

Tuesday Night: Cloudy, with a low around 25.

Wednesday: Mostly cloudy, with a high near 32.

Wednesday Night: Mostly cloudy, with a low around 19.

Thursday: Mostly sunny, with a high near 30.

Barney and I walked for at least 35 minutes this morning while light snow fell. Our total snow accumulation since the snow began early last evening equaled 1.25 inches, and that depends upon where the snow was measured. Less snow accumulated on sidewalks. 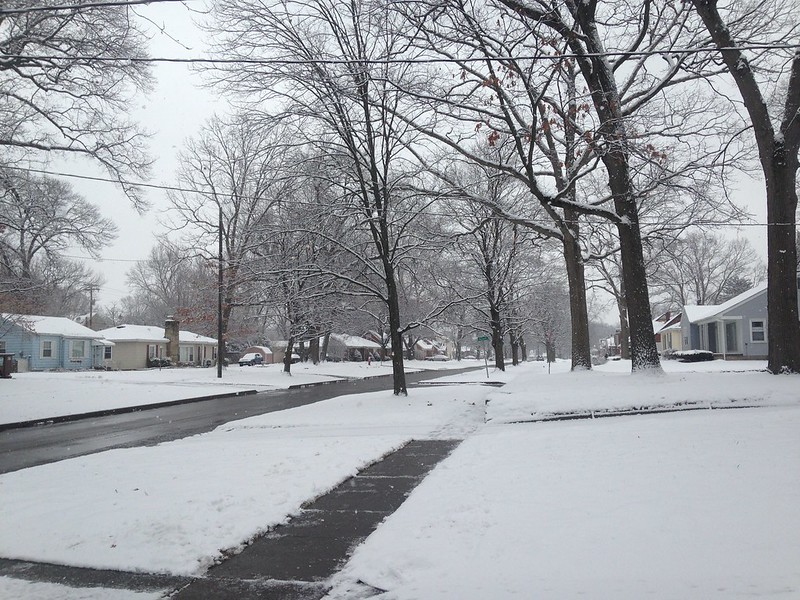 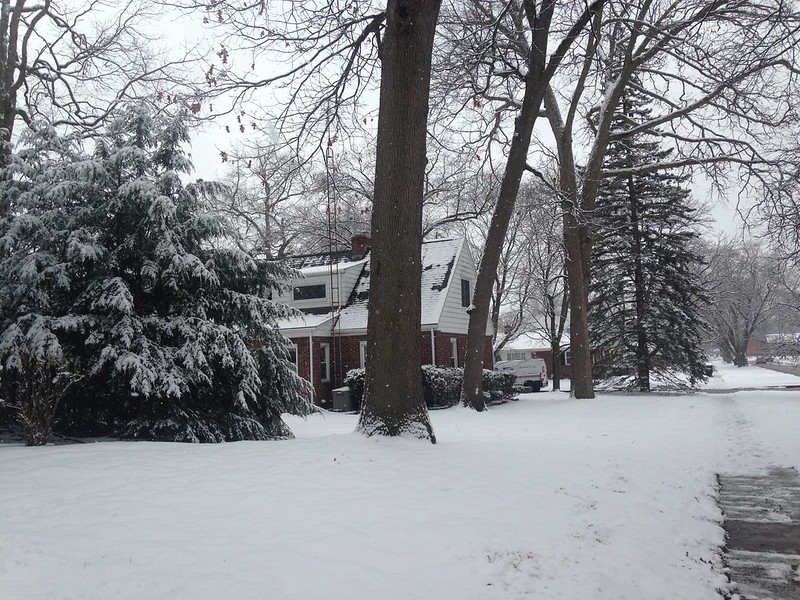 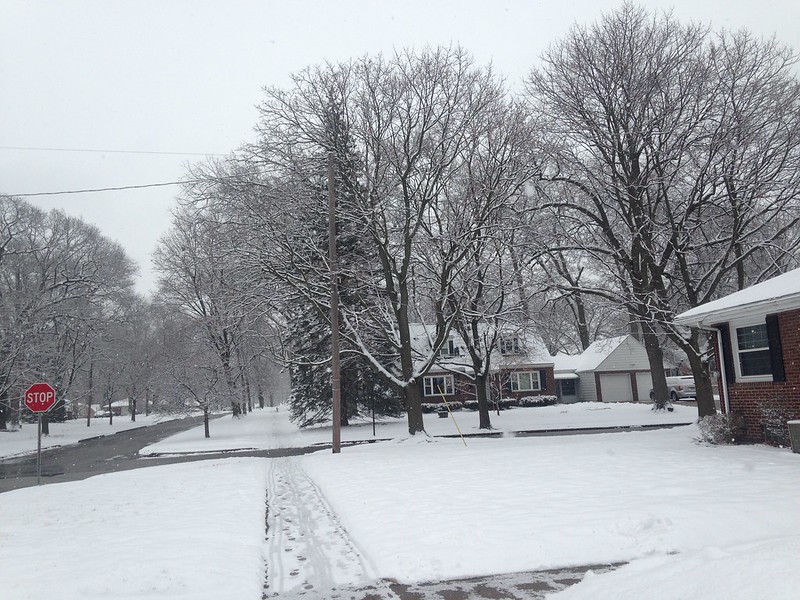 Today: Snow showers likely, mainly before 4pm. Cloudy, with a temperature falling to around 25 by 5pm. West wind 7 to 14 mph becoming northwest in the afternoon. Chance of precipitation is 70%. Total daytime snow accumulation of 1 to 2 inches possible.

Tonight: A chance of snow showers before 7pm. Cloudy, then gradually becoming partly cloudy, with a low around 6. Wind chill values as low as -5. Northwest wind 8 to 11 mph. Chance of precipitation is 30%. New snow accumulation of less than a half inch possible.

Sunday: Mostly cloudy, with a high near 39.

Sunday Night: Mostly cloudy, with a low around 26.

Washington's Birthday: A chance of showers after 1pm. Mostly cloudy, with a high near 40. Chance of precipitation is 40%.

Monday Night: Showers likely. Cloudy, with a low around 35. Chance of precipitation is 60%.

Tuesday: Showers likely. Cloudy, with a high near 43. Chance of precipitation is 60%.

Tuesday Night: A chance of snow showers. Mostly cloudy, with a low around 25. Chance of precipitation is 40%.

Wednesday: Partly sunny, with a high near 32.

.synopsis...
low pressure over the lower ohio valley will continue to move
northeast to the new england coast today. a separate cold front is
expected to move southeast across the area later this afternoon and
into the evening. arctic high pressure from the northern great
plains region builds in on friday and friday night before moving off
to the east on saturday. a cold front associated with a low over
southern ontario/quebec moves across the area on sunday.

.near term /through friday/...
added additional freezing rain for this morning as it seems to
be holding on a little bit longer than initially expected. also
increased/adjusted pops for this afternoon to better time out
the best potential for snow squalls this afternoon.

original discussion...
low pressure over the ohio valley will continue to move
northeast to the new england coast today. the bulk of the
precipitation associated with that system has exited the region.
currently, a dry slot at 500mb has placed itself over the
forecast area, with some low-level moisture and lift producing
patchy areas of freezing drizzle/rain. a mid-level trough is
expected to force another round of snow, currently over indiana
and michigan as observed on radar, west to east early this
morning. this round won`t be as heavy nor produce as much snow
as last night, but it will still impact the morning commute
today. an additional 1 to locally 2 inches of snow through the
morning is possible, with higher amounts most likely across
northwest and central ohio. due to the patchy freezing rain and
additional snow accumulations, we allowed the winter weather
advisory to continue through this morning.

later this afternoon, a large-scale upper-level trough swings
down across the great lakes region. as a result, an arctic cold
front is expected to move southeast across the area between 18
utc thursday and 03 utc friday. model guidance are suggesting a
strong potential for snow squalls along this frontal boundary.
a pressure change couplet with the front, sbcape between 50-100
j/kg, strong 925 mb frontogenesis, snow squall parameter up to
4, and rapidly decreasing temperatures behind the front are all
very favorable for snow squalls this afternoon. though typically
only producing an inch of snow at most, snow squalls can cause
high impacts to the traveling public as they can produce brief
hazardous conditions with heavy snow, gusty winds and rapidly
dropping temperatures. total snow accumulations thursday
afternoon expected to be around 1 inch except downstream lake
erie where snow amounts could be lake-enhanced to two inches.

lake effect snow expected to develop following the passage of
the arctic front. with a very cold airmass aloft and synoptic
lift, lake effect snow bands expected to form in northwest flow,
affecting the primary and secondary snowbelts friday night.
there are a lot of variables working for us, including synoptic
scale lift/enhancement, moderate lake-induced cape, a very cold
airmass, and lift/bands well into the dendritic growth zone. the
big things working against us for significant snowfall is that
lake effect bands will be rather shallow (6,000-7,000 feet at
its peak) and the synoptic environment will be fairly dry. there
is some uncertainty in snow totals and exact locations of
highest impacts but additional headlines may be needed for this
lake effect snow after the current winter weather advisory
expires. right now, we are anticipating an additional 2-4" of
snow for cuyahoga, lake, geauga, and ashtabula counties, and
4-6" of snow across erie, pa county.

in addition to the precipitation, very cold air invades the
region starting tonight and all through the day friday. low
temperatures tonight expected to dip down into the teens and
single digits with wind chills down below zero at times. with
continued cold air advection during the day friday, high
temperatures only expected to reach into the upper teens, maybe
touching 20 degrees at some places.

.short term /friday night through sunday night/...
a large area of high pressure will be overhead at the start of the
short term but will tend to shift east of the area by saturday
morning. this will make for a tricky minimum temperature forecast
for friday night as temperatures drop quickly during the evening
with mostly clear skies and light winds before holding steady or
possibly climbing late as southerly warm advection develops. most
locations are expected to reach the single digits before starting
to recover and nw pa may even approach zero.

shortwave ridging aloft quickly shifts east of the area on saturday
as the next trough approach the upper great lakes. surface low
pressure will move across northern ontario towards hudson bay on
saturday with fairly strong warm advection developing ahead of it.
temperatures at 850mb are expected to recover by about 17c in a 24
hour window and this will be noticeable as most locations climb above
freezing again by late saturday with partly to mostly sunny skies
during the morning. there will be a low chance of showers as a weak
cold front follows on saturday night. precipitation will be spotty
if it develops at all but may lack sufficient ice in the cloud and
could fall as rain/freezing rain with temperatures near the freezing
mark. chances of precipitation should diminish quickly from west to
east on sunday with temperatures creeping back up above normal into
the upper 30s to near 40 degrees.

.long term /monday through wednesday/...
southwest flow and warm advection ramp up further on monday as a
warn front lifts north of the area ahead of low pressure tracking
northeast out of the plains across the central great lakes. raised
temperatures in the monday through tuesday window as long range
models show 925mb temperatures reaching 8-10c at 925mb. showers and
cloud cover may have somewhat of a limiting effect on temperatures
but expect many areas to reach or surpass 50 degrees. a strong cold
front will follow on tuesday night and can expect to see any
lingering showers switch back over to snow tuesday night into
wednesday.

.aviation /12z thursday through monday/...
light snow showers with patchy freezing drizzle moving across
the area this morning. visibilities with snow generally between
1 and 3 miles. mixed bags of ceilings being observed across the
area but mostly ifr or lower expected through the morning.
generally expecting a slow improvement in ceilings this
afternoon. an arctic cold front will move southeast across the
area this afternoon between 18 utc thu and 01 utc fri with lake
enhancement bringing scattered snow showers, some of which may
be briefly intense snow squalls. tried to time out the best
chance for snow squalls with tempo 1/2sm for higher confidence
and tempo 3/4sm for lower confidence. sustained west to
northwest winds of around 10 knots with gusts up to 20 knots
possible as the front crosses terminals this afternoon.
scattered lake effect snow showers develop tonight and continue
through the end of the taf period, mainly impacting keri and
kcle with possible impacts at kcak and kyng.

.marine...
low pressure over wester pennsylvania this morning will track
northeast and move off the new england coast this afternoon. a cold
front will settle south across lake erie this evening with northwest
winds increasing to 15 to 20 knots and waves building to 3 to 5 feet
on the central portion of lake erie. an arctic airmass arrives
behind this front and have included freezing spray in the forecast
where the higher waves are focused overnight.

conditions will improve quickly on friday as a large area of high
pressure builds east across the great lakes region. the high will
shift to the east on saturday with southerly winds increasing to 15
to 25 knots ahead of the next low pressure system that will pass
north of the lakes. winds may approach small craft criteria although
the offshore flow will help keep the larger waves on the outer
fringes of the nearshore waters. conditions will improve again late
sunday into monday as the next area of high pressure builds east
across the lake.

...winter weather advisory in effect until 10 am est this morning...

please listen to noaa weather radio or go to weather.gov on the
internet for more information about the following hazards.

snow squalls are possible this afternoon and evening as an arctic
front moves southeast across the area. affected locations could see
rapidly changing weather and road conditions with brief heavy snow
and gusty winds. a quick snow accumulation up to 1 to 2 inches is
possible.

.days two through seven...friday through wednesday.

hazardous weather is not expected at this time.

spotter activation is not expected at this time.

McClatchy files for bankruptcy, ending family control; it hopes to shed much of its pension obligations and eliminate ~60% of its debt

oligarch buying a nomination and an election.

The Bloomberg campaign is working with Meme 2020, whose lead strategist is the CEO of Jerry Media, to create sponsored posts on influential Instagram accounts

Analysis: right-leaning news outlets placed 227 cookies on average vs. 131 for left-leaning sites, based on partisan outlets among the 10K most popular sites

131 cookies is still 131 too many. All such sites are garbage. This is why web readers should block as much crap as possible.

hilarious media whining for the day:

Interview with Vogue.com's new editor Stuart Emmrich about his vision for it, taking up the job because it's digital, how he never used a CMS before, and more
–

Maybe all CMSes in the media industry are garbage.

And most of the above discussion angst came from ... Twitter, of course, the media's favorite cesspool silo.

Rush Limbaugh: “Mr. Man Donald Trump” will “have fun” with Pete Buttigieg because he kisses his husband

Ladies and gentlemen, the latest winner of the Medal of Freedom, as bestowed by President Trump.

Radio Sputnik, a propaganda arm of the Russian government, has started broadcasting on three Kansas City, MO, stations; it's been broadcasting in DC since 2017

3 stations in one city??