I made a back-to-back feeding of my sourdough starter. I fed during the day yesterday, followed by another feeder overnight.

I feed my starter with King Arthur White Whole Wheat flour. I currently use the stoneground version that I bought at Amazon.com because I can no longer find the basic KA WWW in Toledo. I used to buy KA WWW at The Andersons, but when that store closed in the summer of 2017, I bought the flour at Kroger, but now that store no longer carries it.

House temp today: 65 degrees, according to the living room thermometer. That's due to some current "warm" temps. We have not used the furnace yet this fall.

Tore the levain into small pieces and added them to the water. I used my bread mixing whisk, whatever it's called, to break up the starter and stir it in the water.

Added some flour to the starter and water and stirred the mixture. Then I added the rest of the flour and stirred some more. A wooden spoon would be a good tool to use too for mixing.

Added the salt and mixed some more in the bowl. Mixed until the dough was shaggy.

Kneaded the dough for 12 minutes. After kneading, the dough ball was tacky and firm-ish as expected and NOT wet and sticky, like would occur if the hydration was 75 to 80 percent.

Fermented in lightly oiled bowl covered with plastic for one hour.

Dumped the dough onto a lightly oiled counter and conducted a stretch and fold, which means patting the dough ball out to make it a little flattish and then stretching the dough and folding back onto itself and doing this on all four sides of the dough.

Placed dough back into the lightly oiled bowl and covered it with plastic.

Fermented for another hour.

Dumped dough onto a lightly oiled counter and doing the stretch and fold again per above.

Placed dough back in the bowl.

Dumped dough onto lightly oiled counter. I used olive oil on the counter and in the fermentation bowl. After dumping the dough, I rounded the dough with my hands and/or with the metal scraper.

Bench rested for 15 minutes by covering the dough ball with the fermentation bowl.

I flattened the dough ball a little and tried to shape it into a log by rolling the dough. I never get this part right. After shaping, the dough ball/log was a little misshapen.

I pitched the seams closed by using a little water.

Proofed for a little over 4 hours in an oval-shaped Brotform banneton basket with the liner. I covered the basket with a plastic bag.

Proofed seam side up.

Preheated oven with stone on the fourth rack level from the top at 515 degrees for 40 minutes with the metal bowl in the stove for the last 15 minutes of preheating.

In the final 5 to 10 minutes of the oven preheating, I removed the proofing basket from the plastic bag, and I sprinkled flour onto the top of the dough (the seam side) while it was still in the basket.

Dumped the dough onto parchment paper with the seam side down.

After stove was preheated and dough was ready, I removed the metal lid from oven and placed the lid on top of the stove.

Covered the stone with the large metal bowl.

I didn't have a spray bottle to spray a mist of hot water on the underside of the large metal bowl in the oven after I placed the dough and parchment paper on the stone.

Today, I warmed hot water in the electric tea kettle. I poured some water in a small bowl. I folded a paper towel into a small rectangle. I used tongs to grab the folded paper towel and to dip the towel into the small bowl of hot water. Then I used the tongs to smear the hot water on the underside of the hot metal bowl before lowering the bowl over the dough and closing the oven door.

After 15 minutes (20 minutes left on the clock), I removed the metal bowl from the oven.

After 25 minutes (10 minutes left on the clock), I rotated the bread on the parchment paper to ensure that the side closest to the back of the oven does not get baked too much.

After 35 minutes was up, I turned the oven off, but I left the bread in the oven for another 5 minutes to darken the crust a little more.

After 40 total minutes in the oven, I removed the bread from oven and placed it on a cooling rack.

Normally, I would let the bread rest for at least four hours and usually overnight before cutting into it, but Deb and I were impatient. After two hours, I cut into the bread, and it tasted wonderful. I have not eaten enough good bread over the past couple years.

Today's bread reinforced my belief that bread is my favorite food. I was surprised at how well it tasted, despite that the only whole grain was my starter.

The crumb was firm and tight with tiny small homes. It looked and tasted similar to Zingerman's Farm Bread. With only a 65% hydration, the crumb is expected to be tight without any large holes.

I need to do a better job shaping the dough between fermentation and proofing. It turned out a little misshaped. Deb canned applesauce, and the jars appear in the background. 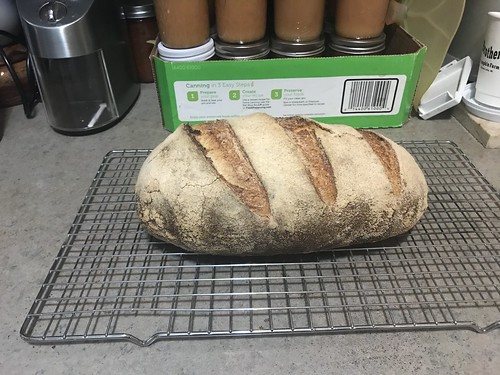 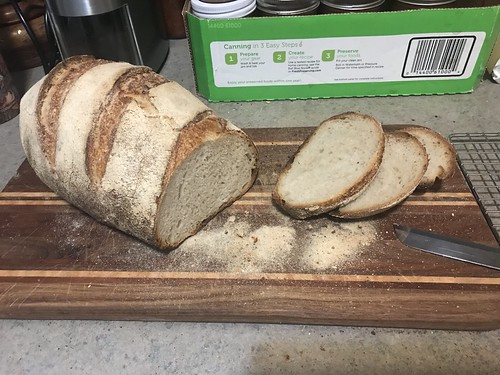