Hurricane Dorian may become a major hurricane tomorrow and hit the central east coast of Florida on Sunday, but it's too early still. Two mornings ago, the forecast showed Dorian never becoming a hurricane anywhere.

The U.S. National Hurricane Center said Dorian was expected to grow into a potentially devastating Category 3 hurricane before hitting the U.S. mainland late Sunday or early Monday somewhere between the Florida Keys and southern Georgia.

Dorian blew through the Virgin Islands as a Category 1 hurricane on Wednesday while raking nearby Puerto Rico with high winds and rains.

The storm caused an islandwide blackout in St. Thomas and St. John in the U.S. Virgin Islands, and scattered power outages in St. Croix, government spokesman Richard Motta said. The storm also downed trees and at least one electric pole in St. Thomas, he said.

And there were no reports of serious damage in the British Virgin Islands, where Gov. Augustus Jaspert said crews were already clearing roads and inspecting infrastructure by late Wednesday afternoon.

"Dorian Strengthening - Increasingly Dangerous Threat to Bahamas and SE US"

GFS model forecasts the storm moving more westerly through central Florida with the center emerging over the Gulf and then making a second landfall along the Gulf coast.

The European model forecasts the storm hitting the central coast of eastern Florida but at a more northwesterly angle, which would keep the storm center over Florida and then into Georgia as it moves northward. Obviously, that means no emergence over the Gulf for possible re-strengthening and making a second landfall. 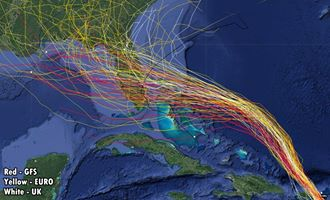 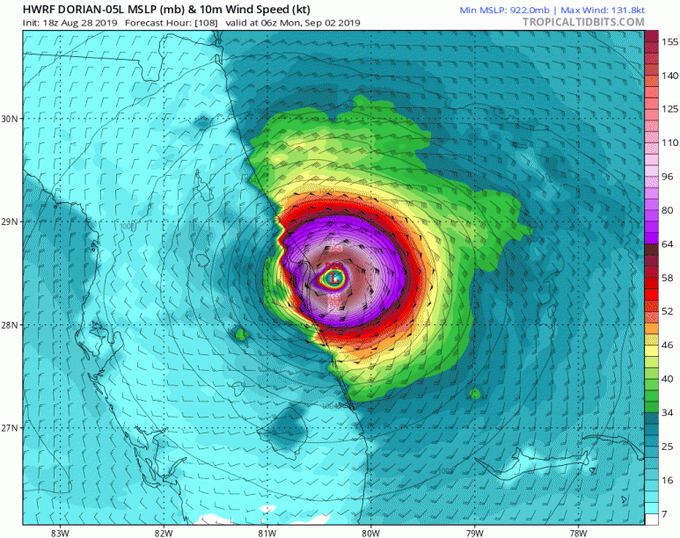 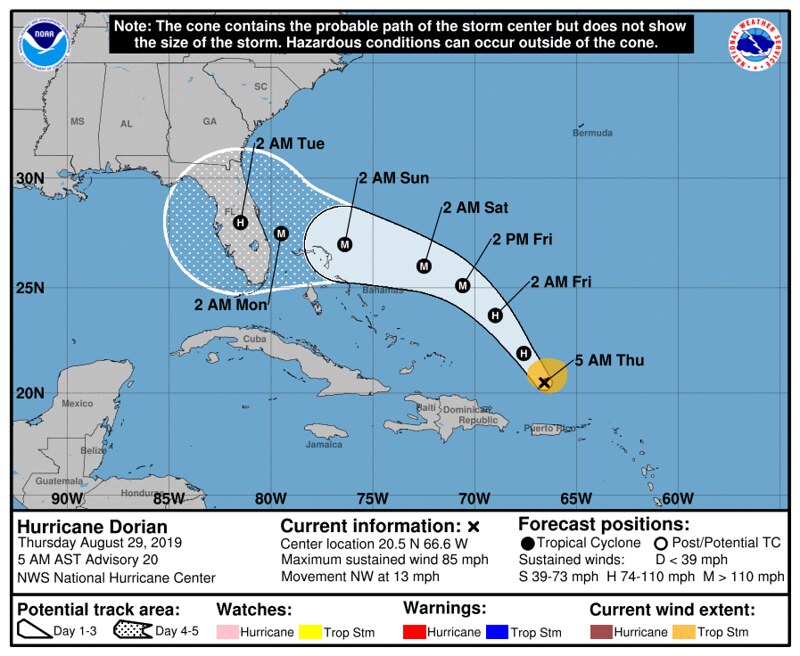 ...DORIAN FORECAST TO STRENGTHEN INTO A MAJOR HURRICANE DURING THE
NEXT COUPLE OF DAYS...

There are no coastal watches or warnings in effect.

Interests in the northwestern and central Bahamas should monitor the
progress of Dorian.

At 500 AM AST (0900 UTC), the center of Hurricane Dorian was located
near latitude 20.5 North, longitude 66.6 West. Dorian is moving
toward the northwest near 13 mph (20 km/h), and this general motion
is expected to continue through Friday. A west-northwestward
motion is forecast to begin Friday night and continue into the
weekend. On this track, Dorian should move over the Atlantic well
east of the southeastern and central Bahamas today and on Friday,
and approach the northwestern Bahamas on Saturday.

Maximum sustained winds are near 85 mph (140 km/h) with higher
gusts. Strengthening is forecast during the next few days, and
Dorian is expected to become a major hurricane on Friday.

RAINFALL: Dorian is expected to produce the following rainfall
accumulations this weekend into early next week:

This rainfall may cause life-threatening flash floods.

SURF: Swells around the U.S. and British Virgin Islands and
Puerto Rico should gradually diminish today. Swells are likely to
begin affecting the east-facing shores of the Bahamas and the
southeastern United States coast during the next few days. These
swells are likely to cause life-threatening surf and rip current
conditions. Please consult products from your local weather office.

Next complete advisory at 1100 AM AST.

Soon after the previous advisory was issued, Dorian appeared to
have a bit of a hiccup in its structure. A dry slot was noted
penetrating into the southeastern portion of the circulation, with
the eye becoming cloud- and rain-filled. In fact, dropsonde data
from the Air Force Reserve mission indicated that the central
pressure had come back up a bit to around 991 mb. That being said,
the plane still measured maximum SFMR winds between 70-75 kt, so the
initial intensity is being held steady at 75 kt for this advisory.

Dorian continues northwestward, or 325 degrees at 11 kt.
Confidence in the track forecast is fairly high for the first 48
hours, with Dorian expected to continue moving northwestward and
then begin to turn west-northwestward between mid-level ridging to
the north and a mid- to upper-level low retrograding westward
across the Straits of Florida. The models, and their ensembles,
continue to diverge after 48 hours and have not really budged from
their respective solutions compared to yesterday. The GFS
is a northern outlier from the rest of the guidance, showing a
weaker ridge and bringing Dorian close to the Florida/Georgia
border, while the UKMET and ECMWF models show stronger ridges
and remain the southernmost solutions near South Florida. Given the
spread in the guidance, the new NHC forecast blends the previous
forecast with the simple multi-model consensus aids and the HCCA and
Florida State Superensemble aids, and it actually ends up in a
position very close to the tightly clustered global model ensemble
means. The most notable change in the new forecast is that it's a
little bit slower than the previous one as Dorian approaches
Florida.

Various shear analyses are indicating 10-15 kt of southwesterly
shear over Dorian at the moment, but the global models show this
shear diminishing within 12-24 hours. With lower shear and very
warm waters, all of the intensity models forecast Dorian to begin
strengthening again soon, and rapid intensification could occur.
The updated NHC intensity forecast has been increased from the
previous one and most closely follows the HCCA and Florida State
Superensemble aids during the first day or two. After 48 hours, the
official forecast is near or just above the intensity consensus, but
it's still lower than the solutions shown by the HCCA, Florida State
Superensemble, and the HWRF. Dorian is likely to reach major
hurricane strength in the next day or two and is forecast to
maintain that status until it reaches land.

Yesterday morning while walking Barney, a lone Barn Swallow flew around overhead above the Tiff Ditch stream and bridge on Woodmont.

On either Sunday morning or Monday morning of this week, I saw an adult female robin on the ground near our backdoor, and two fledgling robins chattered and followed Mom, close behind. A late nesting. And I have not seen nor heard those robins since. They must have flashed through our yard. On that morning, the birds moved toward the front through the driveway, instead of staying in our backyard.

The SPC showed all of the lower peninsula of Michigan under Marginal Risk for severe weather today, except for the extreme southeast edge of the state. Lenawee and parts of Monroe counties are under the Marginal Risk.

Cle has not issued an HWO for Lucas County. The N. IN. and Det/Pon NWS offices have issued HWOs for counties that boarder Lucas County.

There is a chance for a thunderstorm with gusty winds early tonight.

Scattered thunderstorms are possible this evening as a cold front passes through the area. Some storms may become severe with damaging winds to 60 mph as a primary threat but large hail will also be possible. Storm motion will be east around 45 mph.

Tonight: A chance of showers and thunderstorms, mainly between 10pm and 11pm. Increasing clouds, with a low around 65. Southwest wind 11 to 16 mph. Chance of precipitation is 30%. New rainfall amounts of less than a tenth of an inch, except higher amounts possible in thunderstorms.

most models have this line of convection weakening as it approaches our forecast area with instability ahead of the convection diminishing through the night. only scattered showers with an isolated chance of thunder is expected.

however, there are a few models that hold onto higher instability of up to 2000 j/kg, which would be coupled with deeplayer shear of up to 40 knots. if this is the case, then storms certainly will be need to monitored. model trends will have to be closely monitored to see if there is a hint of higher instability lingering longer than initial projections.

Tonight: A chance of showers and thunderstorms, mainly between 10pm and 11pm. Increasing clouds, with a low around 65. Southwest wind 11 to 16 mph. Chance of precipitation is 30%. New rainfall amounts of less than a tenth of an inch, except higher amounts possible in thunderstorms.

Friday Night: Mostly cloudy, with a low around 59. West wind around 5 mph becoming light and variable in the evening.

Saturday: A slight chance of showers after 2pm. Partly sunny, with a high near 75. East wind 5 to 7 mph. Chance of precipitation is 20%.

Saturday Night: A chance of showers, mainly after 8pm. Mostly cloudy, with a low around 60. Chance of precipitation is 40%. New precipitation amounts between a tenth and quarter of an inch possible.

Sunday: A chance of showers. Mostly cloudy, with a high near 76. Chance of precipitation is 30%.

Sunday Night: A chance of showers before 2am. Mostly cloudy, with a low around 62. Chance of precipitation is 30%.

Labor Day: Mostly sunny, with a high near 80.

Monday Night: Mostly clear, with a low around 63.

Tuesday Night: Partly cloudy, with a low around 65.

Wednesday: Mostly sunny, with a high near 79.

...there is a slight risk of severe thunderstorms across parts of
the central plains...upper midwest and western great lakes...

...summary...
thunderstorms associated with a wind damage and hail threat will be
possible this afternoon and evening from parts of the central plains
east-northeastward into the western great lakes.

...central plains/upper midwest/western great lakes...
an upper-level trough will move from the upper mississippi valley
into the western great lakes today with the southern extension of
the trough in the mid mississippi valley. at the surface, a cold
front will advance southeastward across wisconsin, iowa and
nebraska. surface dewpoints in the mid 60s to lower 70s f ahead of
the front will contribute to moderate to strong destabilization by
afternoon. a pronounced increase in low-level convergence along the
front in the mid to late afternoon is forecast to result in
scattered thunderstorm development. several short line segments
appear likely to develop along the front and move southeastward
across the warm sector. rap forecast soundings just ahead of the
front from near omaha to near chicago at 00z/friday generally show
mlcape values in the 3500 to 4500 j/kg range. 0-6 km shear values
along this corridor are forecast to range from 35-40 kt at omaha to
near 50 kt at chicago. this environment will likely support a severe
threat. wind damage will be possible with the more organized line
segments. hail is expected to be the lesser threat mainly due to
warm mid-level temperatures and sub-optimal lapse rates.

further west into the central high plains, instability is forecast
to drop off with westward extent. this combined with convective
coverage issues will probably keep any severe threat isolated during
the late afternoon and early evening. instability is also forecast
to be problematic across lower michigan. this should help to keep
any severe threat marginal there as well.

note: the next day 1 outlook is scheduled by 1300z

This Hazardous Weather Outlook is for northern Indiana, southwest
Michigan and northwest Ohio.

There is a chance for a thunderstorm with gusty winds early tonight.

.DAYS TWO THROUGH SEVEN...Friday through Wednesday.

No hazardous weather is expected at this time.

Spotter activation is not expected at this time.

This hazardous weather outlook is for portions of southeast
Michigan.

Scattered thunderstorms are possible this evening as a cold front
passes through the area. Some storms may become severe with damaging
winds to 60 mph as a primary threat but large hail will also be
possible. Storm motion will be east around 45 mph.

.DAYS TWO THROUGH SEVEN...Friday through Wednesday

No hazardous weather is expected at this time.

Spotter activation may be needed this evening.